at US Sport Aircraft

Richard had sent me a note about some nose strut problems at his flight school. I read another about a strut failure in Europe. I contacted Ft Pierce who forwarded my note to Patrick in Addison. I was a little concerned about Sally's nose strut. Lately I had noticed that there was some wear on the wheel pant from the strut rubbing against it. Patrick responded that I had nothing to worry about as long as the strut cleared the pant. Hmmmm.

I sent some pictures and discussed the situation. It didn't look TOO bad, but... So the concern took root in my brain, something to keep an eye on. 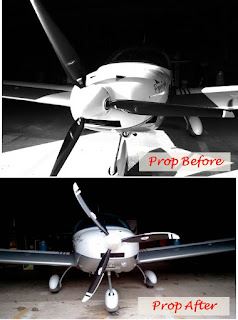 During the conversation we also discussed the wear and tear my prop was taking. The leading edge tape had some good nicks in it. He quoted me a good price and planted that seed in my brain. As I planned my return trip from Scottsdale it occurred to me that I should plan on an oil change, by that time the trip would be over the recommended 25 hours when using AVGAS. The pieces started to come together so I added KADS to my flight plan.

I called Patrick the week prior to my planned arrival to make sure he was ready for me. I also needed to get some taxi directions to US Sport Aircraft after landing. Everything was arranged. The new prop was in and he would do the oil change. It should take less than a day to get her all buttoned up.

As mentioned in a previous post, the flight in was great, testing my skills working with controllers flying at night into congested airspace. The accommodations were superb, a Hilton Garden less than 10 minutes away. I slept soundly.

When I called the next morning work was well underway. The engine compartment was filthy, they cleaned it. The original overflow bottle was a piece...eh, it was substandard. They changed it. They asked if my POH had the latest revisions, I'll get a new one. A binder was created with all maintenance information well organized including all Service Bulletins. Nice.

I asked about the canopy seal. A piece...eh, we'll send you a new, improved one. He showed me the new Air Conditioners and we talked about inadequate heating. He has some good suggestions for that. Canopy alignment, we'll take care of that. Every question addressed, and with an attitude that we want to make Sally better than new. Nice. 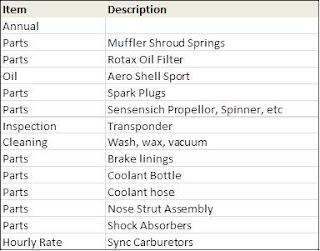 The nose strut was worse than expected but not as bad as it might be. He had some ideas about repairs, but this would delay my departure. I made arrangements to stay an extra day.

So as long as we have the time... Completed the Annual, tuned the engine, washed, waxed and vacuumed Sally. (Even added a few spots of touch up paint.) ...and ultimately changed out the nose strut. Ouch. ( I honestly don't remember ever 'pranging' her in. Though unlikely, I think it could have been done horsing her around in the snow. In any case I just couldn't leave thinking that I could put a new prop on without protecting it with the new strut.)

This was great experience. True professionals who understand customer service. Because they are pilots, they understand pilots. I look forward to doing this again.
Posted by Pilot at 12:40 PM