Cedar Key derives its name from a 1542 Spanish map that identified the area as “Las Islas Sabines,” meaning “The Cedar Islands.” Although the island on which this town is located is called North Key, the “Cedar Islands” reference applied to the abundant growth of cedar trees that formerly covered all of a group of islands located in the area. The Town of Cedar Key was established during the Civil War (circa 1840) on Atseena Otie, the Creek Indian name for Cedar Island. Lumber was the primary industry, although fishing and cotton shipping were also important, and sawmills and pencil factories dominated the town in the 1880s. The pencil plants closed down when the cedar was depleted. Shipping by rail and sea made Cedar Key an important port city until 1886, when the port of Tampa began to draw shipping away from Cedar Key. The old-fashioned fishing village is now a tourist center with several regionally famous seafood restaurants. The village holds two festivals a year, the Spring Sidewalk Art Festival and the Fall Seafood Festival, that each attract thousands of visitors to the area. ~ City of Cedar Key

★ George T Lewis Airport is named in honor of Petty Officer First Class Lewis. He was a World War II Era casualty on October 25, 1944 during The Battle of Leyte Gulf. ★ He served with honor in the United States Navy. ★ Remembered by the people of Georgia ★ May his example inspire us to be strong and responsible global citizens. We can do great things. Together.★

Certus had come down to do some work for a few Florida customers and by Thursday we were ready for a break. I wanted him to fly Sally to see if he would notice any maintenance issues that I may have overlooked. We decided to fly up to Cedar Key. The airport is located about 75 miles northwest of Tamps, but to avoid a long leg over water we stayed "feet dry" flying up the gulf coast past Crystal River then headed out over the water for the last 30 miles of the trip. 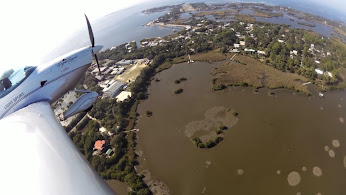 I called at 10 miles to announce our arrival and a sweet voice responded by asking if we required transportation into the village. Sure! She said she would send a car to meet us. We couldn't see the airport. The runway is short - the shortest paved public runway in Florida and surrounded by trees. At 5 miles I thought I saw the runway through breaks in the tress and soon after we entered a left base for RWY23. Certus made a great landing right on the numbers. Judy came by in a van to pick us up to take us into town. $20 roundtrip with a restaurant discount if we ate at "Steamers".  The grouper sandwiches were great. We asked her to come back for us at 1:00pm and when the minute hand was straight up she came rolling down the street. She gave a locals history of the town during our trips and we enjoyed the conversation very much.

As we did our preflight for departure I saw a bald eagle land on a small tree near the end of the runway. Just beautiful.

After takeoff we flew down the coastline to get another look at Cedar Key. I'm convinced I'll be back. It might make a good destination for a SportCruiser Fly-in! 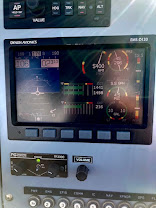 I added some more tape to my oil cooler inlet before leaving Tampa Exec. I want to get the temperature up to approximately 200°F during cruise. I have more than 2/3 covered now and she is finally running hot enough to burn off any moisture in the oil.

Now having flown Sally, Certus has some ideas to improve performance even more. Stay tuned.

Apopka comes from Seminole word Ahapopka for "Potato eating place". Apopka is often referred to as the "Indoor Foliage Capital of the World" due to the extensive Greenhouse nurseries there. Orlando Apopka Airport is a privately owned, uncontrolled, public-use airport located four nautical miles (7 km) northwest of the central business district of Apopka, in Orange County, Florida, United States. It was previously known as Orlando Country Airport and McDonald Airport prior to that. ~Wikipedia

Cold. As I pushed to open the hangar door the cold aluminum stung my hands. It's a cold day in Florida when the temperature gets down into the 40°s. However I do remember using an ice chipper to get the doors open in Quakertown. At least the sun was shining on my back and there was very little wind. It was a good day to go flying.

The nose tire was a little low so I put some air in it. A lot of pulls to get the burp. It never comes easy on cold days. I should remember to do it after the flight. I covered about 1/4 of the oil cooler with tape to help the engine run warmer. All the electronics checked out but I was close to my "bingo fuel" number for takeoff. 100LL was listed as $3.25/gal if I needed any. It would take just over an hour to get there and back.

The trip up was nice. Very little traffic and as I listened to the radio the busiest CTAF seemed to be Winter Haven to the east. The track took me right by Zephyrhills and I kept a good scan going for jumpers. The jump plane did announce "Jumpers in the air" as I transited the airspace but I didn't see any 'chutes. The air was smooth with about 10kts on the nose at 2600'.

Apopka airport is located just north of the large lake. Winds were generally out of the north but traffic was using 15. Winds weren't really a factor so I went with the prevailing traffic.  Runway 15 uses a right hand pattern so the entry from the south is pretty easy. At ten miles out there were two in the pattern and another called ten miles north. As I entered I saw the Cessna above me about mid-field and he took interval on me. My pattern was bit bit tight but resulted in a smooth touch down for my only T&G there. I departed for home. 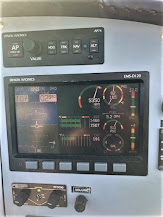 When I switched to the VDF CTAF my hangar neighbor Brian, was announcing his takeoff in his Stearman. Kind of like watching a mini-airshow while on the downwind leg.

This was a good flight to another Florida airport that I had never been to.

Crystal River is at the heart of the Nature Coast of Florida. The city is situated around Kings Bay, which is spring-fed and so keeps a constant 72 °F (22 °C) temperature year round. Kings Bay can be home to over 400 manatees during the winter when the water temperature in the Gulf of Mexico cools, and is the only place in the United States where people can legally interact with them in their natural conditions without that interaction being viewed as harassment by law enforcement agencies. In December 2013, the Citrus County Board of County Commissioners passed a resolution modifying the airport's name to Crystal River Airport – Captain Tom Davis Field. CAPT Tom Davis, USN (Ret), is an accomplished Naval Aviator out of the Navy's jet fighter community and a recipient of the Legion of Merit and the Distinguished Flying Cross. ~Wikipedia

CGC is about 50 miles north of VDF. It was a good flight on a cool Florida morning and gave me a chance to check our my new avionics. I'm still getting use to my 796 and this trip would be a chance to couple it to my GDL 39 ADSB receiver. 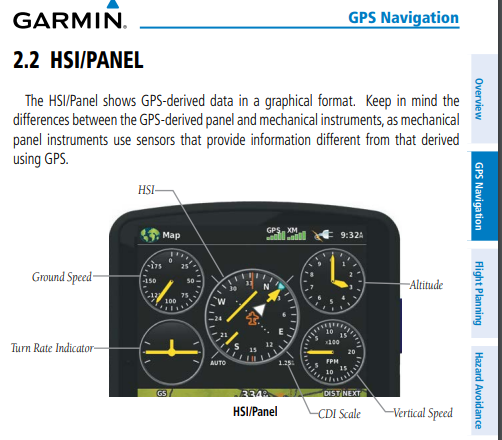 Preflight went well. It took a lot of pulls to get the burp but no leaks, flats, or electrical problems. However on my taxi out to the run up area I did notice that the GPS input to my Dynon system had failed. No purple arrows. After the engine runup I did a DSAB configuration check and all was well on the Dynon side. The GPS was fine so I decide to depart and drive the autopilot manually. I pushed the Map button and brought up the HSI panel. I hadn't used this old friend in a long time. I set the altitude for about 2800' and put the heading bug just to the right of the arrow to compensate for the northerly wind.  (No wind arrow.) The air was smooth.

Meanwhile I checked weather and traffic on the GPS. It works! The GDL 39 has and independent battery and uses Bluetooth to connect to the 796. It was a very easy setup and I'm pleased with the results. If you watch the video you can see the antenna setting on the glare shield. It was a quiet day so very little traffic and I didn't see any weather until I returned to Tampa Exec. Just a couple of pixels of green but enough to prove the the ADSB system works.

I also figured out why I wasn't connecting to the Dynon system. I had the 796 home over Christmas to learn some "Knobology" and let the battery go dead. I lost some settings and one was the interface to Dynon. I called Certus and replicated what he had on his device. My purple line is back.