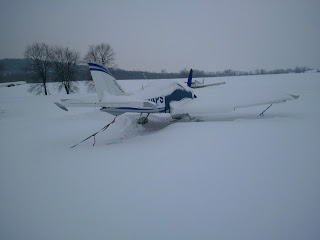 I heard on a Podcast that the weather this winter has been 'a bit squirrely'. I might have another word for it but you get my drift. Another week of flying lost to poor weather conditions. I went out to the airport to clean the snow off and struggled just to get out to the plane. Snow is roughly a foot deep with more coming down. Another inch or so expected today, another inch or so tomorrow with a blizzard expected mid-week.

The trick is finding something to do while waiting. Read, study, explore, and dream about warm sunny days seems to be the way to get through the bad weather season. I'll admit it is frustrating to have a new airplane sitting on the ground.
Posted by Pilot at 1:20 PM No comments:

Stunning news that Piper decided to discontinue its business arrangement with CSA. Initially I felt like an orphan, that the most expensive investment of my life (aside from my house) had just been ruined.As I had time to absorb the details, I found that I was not so much an orphan but more the victim of a divorce and would get child support.

What happens now? The name of the aircraft will change from PiperSport to SuperCruiser. But other than that it is very much business as usual. The network of dealers, distributors and service agents that surrounds former SportCruiser will continue to operate and to be strengthened; though now directly under the Czech Sport Aircraft banner. Both new and existing clients will continue to be receive the highest possible levels of service – much of the supply and logistics chain has always run directly with CSA.
As the aircraft continues to prove itself as a market leader, fun, economic and reliable Light Sports Trainer and Tourer; sales look to continue to hold market share and grow in numbers. Clients can also be reassured that CSA is a strong and stable company. Backed by leading European private capital firm Slavia Capital, the company enjoys respect in the market, has a current order book in excess of 150 aircraft and continues to invest in R&D.
Slavia Capital continues with leading international financial institutions on preparation of the Initial Public Offering of CSA shares at the Prague and Warsaw Stock Exchange, CSA is financially strong and transparent, meeting fully IPO information standards.

What this does to sales of the airplane is unknowable. Piper's involvement seems to have ginned up sales. Its abandonment won't help, I'm sure. From my day to day operations nothing has changed. My goals are still the same. My involvement in aviation is still the same.Plus, I have a great airplane sitting at the airport waiting for me. 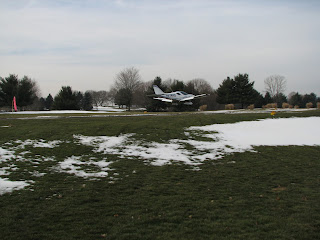 I read an interesting analysis in SportPilotTalk.com:

CSA is floating an IPO and concurrently trying to broaden its markets (military trainer sales, broader international distribution, more instructional sales). It wants to grow internationally. However, we don't see in its announcement any reference to increased manufacturing capacity. That boils down to a relatively fixed supply of a/c needing to fill a potentially expanding number of sales slots. If we were Piper, business growth would be our goal as well and we would view this as an undesirable restriction on growing domestic sales while overhead costs associated with the master distributorship are probably somewhat fixed.
From a macro perspective, both companies appear to be making rational decisions. From a (N America) customer perspective, it may end up meaning little in the near term, given the alliance of regional distributors that was announced. From the individual distributor's perspective, slow sales volume probably fits the financial realities of the current economy that they must accept for now. But it appears that all of this is driven by the financials (no surprise; we are talking business here...) rather than decisions being made on some high philosophical plain.

Glitch #1. I had a long conversation with the mechanic. I had him load the video I sent and review it for any unusual problems and he immediately pointed out the oil temperature. His solution was to add the baffle over the oil cooler inlet duct. While skeptical I agreed to do this and so far the unusual indications have stopped. It could just be that this simple mechanical fix could solve the perceived complex electronic fix that I thought it was. I need some additional cold weather flights to verify.

While I waited for the oil to warm up I spent some time customizing my instruments. I’m a “North Up” kind of guy so I dove into the menus to make that change. (It seems that when set as “Track Up’ my position report is always 10 miles south of the field.)  I also adjusted the Dynon EMS 120 configuration to recognize when I added fuel so that it would display a ‘quick path’ to initiate the fuel computer. (I also added a step on my checklist to check the fuel/trip computer prior to each flight.)
So now I wait for the weather to improve. I think this quote is typical: “"Very slippery conditions can develop early, but at the end there will be slush, puddles of standing water and areas of fog all draped by a dreary and ...dull, dim and dismal display of gray," AccuWeather's Elliot Abrams
Posted by Pilot at 12:24 PM No comments:

I was out to check on her on Tuesday to see if the nose tire was fixed. It was. Harry was in his shop so I stopped in to find out if there was anything I should be concerned about. He had taken off the wheel pant, inspected the tire and just pumped it up. The pant was replaced and he wanted to check on his way home to insure it was still holding air. When I came out to fly on Wednesday it was still inflated. I suspect I may be 'horsing' it around too much getting it back into the parking spot, I'll have to be more gentle or pull out the  tow bar to help with steering.

I started the process of removing tie down straps and the canopy cover and as I did a beautiful Red Tailed Hawk landed on the abandoned tower by the pond. Just checking the competition I guess. I'm sure he was amused at the amount effort I put into getting ready for flight as he cleaned a feather or two with his beak. I lost count at about 150 props, but she burped soon after that. I removed just a little frost from the wings and tail surfaces and completed the rest of the exterior preflight with no incidents. Before climbing in I pulled her out a bit to get out of the tire ruts in the soft turf.

I like the choke for starting. Four blades and she was running. Glitch #1 is still there. The video shows the engine instruments during run-up. I shouldn't get the warning/alert at 4000RPM. Later in the flight this mysteriously corrects itself and shows the readings typical for a Rotax engine. Warranty work is scheduled next week.

Just a short flight over to KUKT for a full stop/taxi back and off again home to 7N8. No other glitches noted, and after two (very smooth) landings, the nose tire is validated as fixed.
Posted by Pilot at 4:30 PM No comments: