Waiting for the oil to warm up. 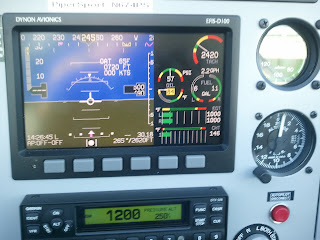 The fall weather is simply too good to let pass. I struggled to get my desk clear so that I could go out to the airport. I was in the air heading north by about 3:00. I had never been to Lehighton before and wanted to check it out as part of my "local airports" tour.

There was a mild chop as I climbed through the haze layer and settled down at 3500'. Visibility was great looking away from the sun but only 5 miles or so looking west. I could easily see ABE and 69N in the distance but picking out anything looking the other way was hard. It was a nice, uneventful trip and I started my descent just past the ridge line.  A crosswind entry to 08 let me land with a slight  left crosswind. Nice airport but no activity other than a guy on a ladder washing his 172.

I departed 22N to the southwest hoping to pick out Grimes. 8N1 lies right next to I78, but is a turf strip in the middle of farm country. Everything looks like it could be an airfield. I decided to forgo a landing until I've had a chance to study some satellite pictures. (I'm looking at it now and I was right...just not confidently right.)

As I approached home I saw this activity south of Butter Valley, a balloon preparing for take off. What a pretty day for sightseeing. 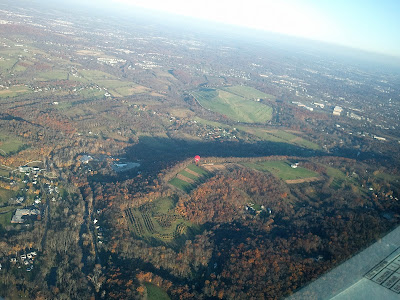 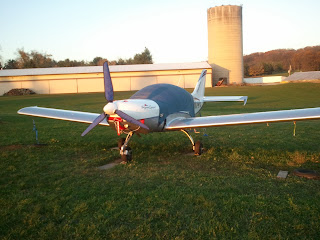 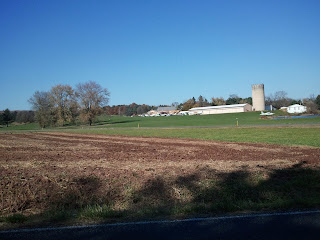 The mission was a simple one. We had not flown together since mid- August and I wanted to get her back into the air. She wanted to try out her new Clarity Aloft Headset, new HD sunglasses and a few new tricks to combat airsickness. I was still checking things from the annual, and besides, it was a beautiful Pennsylvania day. It was the first time she got to see a takeoff from RWY 16. It is just a little different taking off from grass.

I contacted Allentown Approach immediately after take off to get clearance through the Class "C" and we were given a squawk right away. The air was cool and calm and as you can see from the pictures, visibility was fantastic. We traveled over at 3500' and
really enjoyed sightseeing. She had grown up in the neighborhood  at the bottom right of the photo, and I had spent some time walking there after school. Down Hamilton Street, Past the PPL and Hess's, then over the 8th Street Bridge to her house. Sometimes I rode the bus, most times not.

...and around then I spent  some time in the Allentown Airport Traffic Area learning to talk to the tower and other controllers on a hand held mike and listening on a speaker in the cabin of an old Cherokee. I stayed away from there when flying the Champ, although I did wander down the ridge from Slatington to fly through the Water Gap and back up the other side of the mountain. I think we were a little past the peak foliage this year, but then we had a blizzard last weekend that kept us all on the ground around here.

While the controllers were busy, we only saw a few planes during our trip. When I switched frequencies to Blairstown I was surprised at how quiet it was.  They do a brisk breakfast business and I expected a lot of traffic on a pretty Saturday morning. After landing we found that they had been impacted by the sudden snow and their power was still out. After considering our options we decided to head back home and have a late breakfast at 7N8. She had the weekend errands to do and I wanted to winterize Sally.

The flight was uneventful except for one thing, I overflew home base! Flying into the sun, some glare, but mostly finding this little airport from a different direction caused me to miss it. Fortunately I recognized my house when I flew over it and was able to recover before going to N47. We made a nice landing going down the hill on RWY 16.

After a nice lunch we went back to the plane to tie her down, and cover her up. We went home to go about chores and I changed and went back out to the airport to add the winter baffles and take the wheel pants off. All went well until I got to the last screw on the last pant. The driver slipped and I destroyed the head. Different sized drivers only made things worse...aargh. Similarly one screw on the oil cooler baffle would come loose either, with much the same result.

My new best friend is a #2 'easy out' (screw extractor). After carefully drilling a shallow hole in each screw I was able to insert the tool and slowly remove the stubborn screws. Which is really good news because that means a test flight. Hope we have good weather tomorrow. 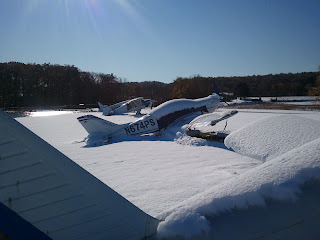 October has been a real "roller coaster", not the least of which has been the dramatic change in seasons. I went out to Butter Valley the morning following our "Apocotoberlypse" (thanks Kevin) to find I had a taildragger. What a sickening sight. Fortunately no damage but merely a starck reminder that winter weather is upon us.

Harry got the lighting package installed. 4PapaSierra is now allowed to wander out after dark. I'm very pleased with the quality of the kit and its installation.

We completed our first annual inspection. No major discrepancies were found, although Harry does have a few recommendations for design changes. Shouldn't inspection plates be screwed on rather then riveted? He also found some water in the fuel line leading down to the fuel pressure sender. I had been having some problems with intermittent low fuel pressure indications and was recommended (by a Facebook friend) to clean or replace the unit. When Harry put in the new sender (from Dynon) he found the water. We suspect it comes from using Mogas with ethanol and have decided to check this line whenever we do an oil change. Hobbs read 104.8.

Yesterday the alarm went off just before 0600 on a dark, frigid morning. I was scheduled to fly Sally (my pet name for 4PS) to Piper Memorial Field for my 'bi-annual' Flight Review. So, after I got the coffee pot brewing I sat down to do my flight planning. The route was simple, no TFRs or other anomalies, but the weather was ugly. Temperature and dew point were equal at M2 and Runwayfinder showed a lot of red. My call to Lockheed only confirmed what I already new.  The good news was conditions were expected to improve once the sun came up. I have been VERY fortunate to have excellent instructors, but since I've been flying Light Sport I haven't really started a relationship with a local guy. I wanted to fly with someone who could 'mentor' me with an LSA, not just do the maneuvers. Through the Sport Pilot Talk Blog I found Paul at AvSport in Lockhaven, about an hour's flight from 7N8.

When I got to the airport I found her encased in frost, the first of the season. Fortunately a blogger friend (thanks Gary) had told me about some de-icing fluid I could pump spray on to melt and remove the frost. It works great, but after polishing the frost off and burping the engine I was ready for another coffee in the warm car. I called Paul at 7:30 and found conditions were still 1/2 mile in mist. Wait...

I could see two hot air balloons rising about 5 miles south of Butter Valley. We had perfect blue skies and still air. The geese on the pond were making a racket, and when they took off flying directly over me I could hear the air swooshing past their wings as they slowly climbed south in the cold air. Wait...

3miles. At 9:00 the digi-weather site reported 3 miles of visibility and Williamsport was calling +6 and clear. We agreed to give it a try, so I finished the final items on the preflight and strapped in. There was still about an inch of snow on the turf taxiway, which was now crusted over with ice. A cautious "full power taxi" with very careful braking got me to the runway threshold. With checks complete a few minutes later I was airborne. ETA for KLHV was 10:30.

I used Flight Following and enjoyed the conversation for the otherwise uneventful trip. 5000 RPM yielded about 100 Kts over the ground at just over 5gals/hr. As the GPS wound down toward my destination I saw a problem. Dense clouds were lining each of the valleys I was passing over and it looked like Lockhaven was in one of those valleys up ahead. When I crossed the last ridge I could see the runway, directly beneath me but KLHV was definitely IFR with the mountain ranges on each side rising above the cloud tops. (IF..., but we aren't.) I diverted to KIPT. Safe arrival just few minutes later. Nice place, great hospitality, free coffee and I got a package of Krimpets from the vending machine. Wait...

At 12:00 Lockhaven went VFR. I entered a left downwind for RWY 9 and felt good about bringing my PiperSport back to Piper Memorial field.  I pulled up to the hangar and Paul and I met in person for the first time.

I won't go into all of the details for the flight review, but will say that it met and surpassed my expectations. It focused on Light Sport documentation, fundamentals and the implications of WEIGHT. It was my first ever flight from the left seat and although not to my standards, I know that I can be safe on that side now. (My landing was a stinker...safe but well left and 'floated'.) I will really enjoy getting more experience in that seat.

AND, what a great guy Paul is! He rearranged his whole day just to take care of me on this last day of the last month. I am delighted to say I have found another instructor/mentor.

...4PS got a lot of nice complements while sitting on the ramp. I think Paul enjoyed the chance to fly a different LSA. The trip home was uneventful except that it was one of 'those moments', when you stop and realize how great it is be a pilot. "Remember this", I said to Sally, "this is good stuff".

So, a nice landing back at 7N8 and as I started my back taxi I sawa large black dog running around free on my left. This dog is just having a great time plowing through the snow, rolling around, darting back and forth, and then sees me. I stopped and immediately put my hand on the ignition switch. Two kids in panic mode come over the hill frantically trying to coral this animal. I decide that if it gets within a wingtips distance I'll shut her down. Fortunately they caught it and took control of the situation. I finished my taxi, parked, tied down and covered her. It was 1800, and I was beat.  Quite a Halloween.
Posted by Pilot at 10:32 AM 1 comment: