61°F fog at 7:00am EST. I look out the window and can barely see my neighbor's house just a few yards away due to the dense fog. Welcome to central Florida. But it isn't time to go back to bed. I start the coffee pot and go look at weather briefings on the computer. By 9:00am it should be in the high 60°s and beautiful blue skies. I get myself ready, grab my gear and head out to Tampa Executive.

The weather looks great by the time I finish the preflight. One last check to insure I have everything before I pull her out of the hangar.  "Hello Sally" as I start the prestart checklist. I use the choke now as it's cold enough to make a difference. The oil pressure was a bit higher, about 80psi. OAT read about 20°C. I closed the canopy for taxi over to the FBO.

I've been doing training flights. I enjoy the work. The wonderful Florida climate makes it a joy to fly this time of year.


We were coming back from a Discovery Flight just south of Plant City, 15 miles east of the field. The active runway at KVDF was 05 and there were no planes in the pattern at my initial call. I opted for a crosswind entry and headed for I75 where it passes north of the runway. Nearing the departure end of 05 I heard a position call from a Cessna "Upwind Rwy 05". I looked over my left shoulder for the traffic. Nope. You know that "itchy feeling" on the back of your neck? Where is this guy? His next report was crosswind Rwy 05. There he is, just in front, right off my nose. "You keep using that word. I do not think it means what you think it means." There is a difference in the nomenclature. The Departure leg is an extension of the runway centerline. The upwind leg is offset from, and parallel to the runway. We called crosswind, #2, traffic in sight.  (BTW, he flew a lousy pattern.)

Be safe out there. 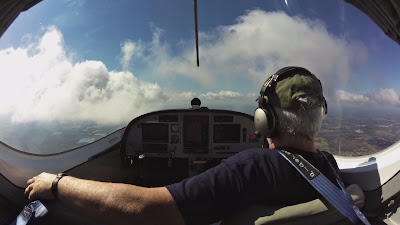 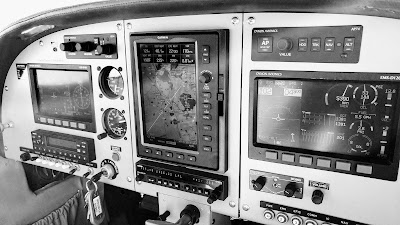 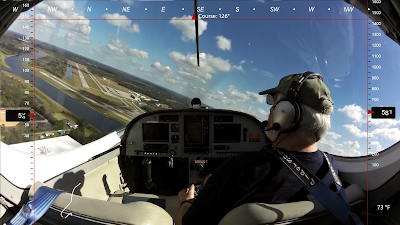 The weather at Tampa Executive was foggy. This time of year the temperature and dew point meet at about 60°F and the high humidity condenses into a thick fog or mist (BR). I waited until the sun warmed the earth enough to get VFR conditions then took off to the north east. Deland is about 85 miles away, very close to Daytona Beach. The trip would take about an hour. Along the way I was vectored around the parachutes at Zephyr Hills and  cleared through the Tampa
Class B and later, the Orlando Class B. Flight following alerted me to numerous targets and I was able to visually confirm most of them.

Sally's numbers were good.
When I switched to the temporary tower at KDED I was instructed to make a straight in approach for runway 5 and call a 6 mile final. Soon a Mooney came in behind me at 8 miles. I was asked to keep my speed up. So I came down the glideslope at about 115kts (indicated) with the trailing traffic closing at about 160kts. The trick was to transition to a "normal" approach speed. I made the no flap landing, touched down long and made the exit just before the Mooney landed. All of the controllers at the field did a great job as ATC.

The show was just a little bigger than last year. Some of the majors were there including Bristell and CTLS. All brands of Auto Gyro were there and constantly providing demonstration flights. I did not see Icon but their competition was there and I spent some time in the booths talking about amphibians. But the "foot traffic" was very slow for a Saturday afternoon. Sebring draws a much bigger crowd.

The weather that had given us morning fog now changed to afternoon cumulus. The bottoms were right about 3500'. R2910 was active. We were given a vector of 220° but that was driving me right into the clouds. So I asked for higher and was given 4500'.  That gave us a smooth ride. The view was fantastic.

The trip home was uneventful.