Kathy called our Christmas activities as "Happy Chaos". Certainly one of the most joyous times we've had since moving to Florida. But the children left and it was time to go back to work. I headed out to the airport to get Sally ready for some student flights.

I changed out the voltage rectifier. The symptom was a low voltage annunciator at low RPM, usually when clearing the runway after landing but occasionally at other times during taxi. Never in flight. I pulled the connector to see if it might just be corrosion, but the Corrosion X used the last time had protected the connectors. They were clean.  It seems I replace this part about once every 18 months, but it is really sensitive to heat so the hotter the flight time the more often it needs to be changed. This one only lasted about 150 hours. (Reference: https://lsaeronaut.blogspot.com/2016/09/voltager-rectifierregulator.html)

The nose wheel seemed to shimmy more that usual during my flight review. This is usually due to low tire pressure. Cooler winter temperatures can cause the pressure to decrease. And this one is a bit tricky to visually check due to the wheel pants. Typically you need to remove the pant to get to the stem to pump the tire but I was lucky this time. Feeling up under the pant I felt the stem and was able to push Sally back enough to rotate the stem to the small notch in the pant to get the compressor attached. 18lbs. 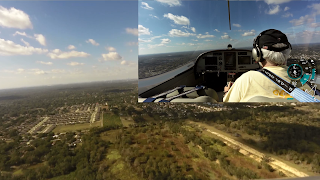 It was close to time for an oil change. I gathered my tools and supplies and removed the upper cowling. After burping the engine (still in the top third, she uses very little oil) I placed my drip pan and positioned my empty gallon jug under the reservoir to get started. I couldn't find the plastic tube to go from the quick drain to the bottle. Rats. So many moves in the past year I just misplaced it somewhere. So that is still on my list.

I went flying instead. Winds were calm so I chose RWY23. Moderate traffic today with a twin in the runup area as I arrived. There was one Cessna 172 on downwind and a Citation called 5 miles out on an extended left base for RWY23. A Piper was on final for RWY36 with another C172 just entering for that runway about 5 miles south. Good flying weather in Florida (low 80°s). When it was our turn we took off and departed to the southeast to overfly the house, then flew north past Plant City (KPCM) to test all of the avionics. Sally performed well.

Back in the pattern things were still pretty busy. We took interval between a Piper making a downwind departure to the north and a Cessna making his base turn. It seemed that most folks had abandoned RWY36 for RWY23 although the winds were still very light. I got three in and really enjoyed the practice. (a) Except as provided in paragraphs (b) and (f) of this section, a flight review consists of a minimum of 1 hour of flight training and 1 hour of ground training. The review must include:
(1) A review of the current general operating and flight rules of part 91 of this chapter; and
(2) A review of those maneuvers and procedures that, at the discretion of the person giving the review, are necessary for the pilot to demonstrate the safe exercise of the privileges of the pilot certificate.
...
(f) A person who holds a flight instructor certificate and who has, within the period specified in paragraph (c) of this section, satisfactorily completed a renewal of a flight instructor certificate under the provisions in §61.197 need not accomplish the one hour of ground training specified in paragraph (a) of this section. 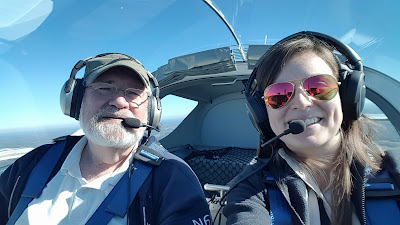 I arrived at the airport an hour before my scheduled appointment time. A beautiful day to fly. A thorough preflight was done.  I made sure that Sally had enough fuel for the flight plus an hour reserve, which meant 6 gallons in each tank. I had done the weight and balance sheet and calculated that we would be good as long as the CFI weighed less than 220 lbs. I met Stacy in the office of Superior Aviation Gateway at Tampa Executive Airport. Weight would NOT be a problem.

I handed over my identification and logbook for copies to be made for my record and Stacy asked me if there were any maneuvers I would like to try. I have been spending so much time doing landing pattern work that all of my high work was rusty. We went to a "training area" about 10 miles east of Zephyr Hills and did a stall series, some steep turns and some emergencies. Then she talked me trough a Chandelle and some Lazy Eights. Fun. I must take time to do this more often as it is pure joy to fly these maneuvers in a plane like Sally. The visibility is fantastic.

Back to KVDF for some landings. It got busy as we were using RWY36 and the Corporate Jets were using RWY5. Eyes outside, I did two (demonstrated a slip on the second) and she did one. Stacy and Sally got along just fine. I hope she takes the opportunity to fly with me again. (Before 24 calendar months go by.) 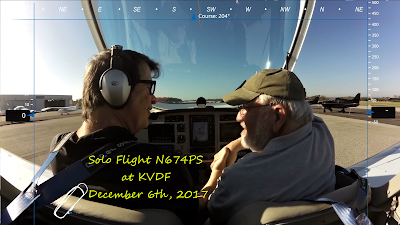 The progress is always slow. Each landing fine tunes the previous effort resulting in small but significant improvements. "You're slow. Go around!" Then, "You're too high", "Nose attitude controls airspeed, power controls rate of descent." Each circuit adds that little bit of experience. The pattern fits together like a chain, a weak link and it all falls apart. "Let's do it again." Slowly, overtime, the CFI becomes silent as the student makes corrections without being prompted. Typically, it takes from 10 to 30 hours of flight time before a pilot has the instinctive feel of an aircraft to be safe flying solo in other than perfect (no wind) weather. And typically, it takes an Instructor about that much time to trust a student to fly his airplane.

Bruce made good progress but just didn't see the roundout and flare. So I added a few exercises to our routine. We departed our home airport to try other venues (KZPH). We exercised. One circuit after another. "Let's try it again, this time hold the speed a little longer." Again....again...and then he saw it. We entered the pattern at home field and I stayed quiet. Nice landing. Again. Nice pattern, good corrections, safe landing. 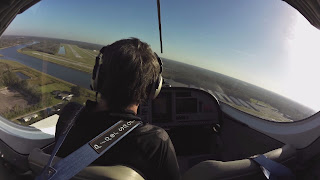 out and I did the customary three circuits. It was perfect weather. He let me out on the ramp and went off on his own.


"But you will want to share the event with your friends and family afterwards. My biggest regret with my solo flight is that I didn’t get any pictures. And while the experience is still fresh in my mind, it would have been nice to be able to look back at that moment. Make sure that your first solo gets recorded. Pictures are great and video is even better."

Video Notes: Solo
Posted by Pilot at 11:24 PM No comments: