Heads will fall, tails will rise 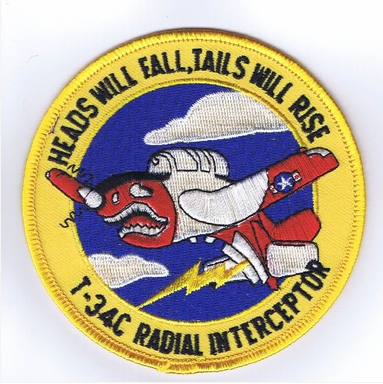 I had a student interested in learning about the VOR. (VHF Omni Directional Radio Range). Sally was providing false sensor alerts but I felt comfortable taking her up for this kind of lesson.

I dug into my old flight bag and found a set of "Foggles" to use as a vision limiting device. I decided to use LAL and SRQ for our practice stations which would keep us clear of the Tampa Class B airspace.

First we went directly to LAL and upon station passage (cone of silence, when the VOR needle disappears on the Horizontal Situation Indicator) I told him about the 6 "T's". 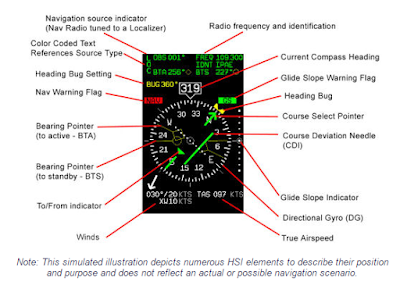 Next we talked about intercepting courses. The head of the needle always falls, the tail always rises. So you pick a heading that will allow the head to fall to the desired course. The head points to the station, the tail indicates the radial you are on. Upon intercepting, the 6T's boil down to Twist and Turn.

I've always felt that the test questions were designed to be tricky and intentionally confusing. Actually seeing it used in the airplane seems to help eliminate that confusion.

I got out to the airport a little after 6:00pm local time. I wanted to do the preflight in daylight. I double checked my flashlight(s) and all of the aircraft lighting. Sally looked good. As we taxied to RWY 05 the sun was just setting. By the time the runup was complete we were passing the "End of Civil Twilight".

It was a beautiful night to fly. The traffic on I4 and I75 was still pretty heavy as people were rushing home after their work day. The lights from the city were coming on. I always think the runway environment at night is spectacular. Runway 05 was in use:

With all of these lights it was easy to establish the runway environment on final. But the last landing of the night had a little extra challenge.  This is something I practice (occasionally) but I had no intention of doing it for this landing. The exciting part comes in the flare. No landing light.
Posted by Pilot at 5:01 PM No comments:

I took extra time with the preflight. The upper cowl was off and I looked for that one telltale oil droplet. A smudge on the exhaust, a drip on the nose wheel pant, or just anything "not right". She looked good. So I buttoned her up and climbed in to fly the 30 minutes down to Sebring. Elrod and Joe were there to meet me. Sally was pulled close to the tools in the hangar and the search for fluctuating oil pressure continued. The inspection took about 45 minutes, the verdict was the loose pin. Solid oil pressure for the entire trip. Sally seems to be healthy.

But there is that nagging voice, that little loss of confidence that makes me wonder if she is really fixed. Did we miss something? Time for another check flight.

A front came through on Wednesday bringing low ceilings to the local area. Thursday was perfect! Another extended preflight with the same results, I was airborne by 11:00am heading east. We climbed to 1500' and stayed north of the high cell towers near Brandon (1667FT). I used different power settings, did some simple climbs and descents and generally gave the engine a light workout. I was convinced she was solid so headed over to Lakeland-Linder Airport (KLAL), home of Sun 'N Fun. A brief stay there then back to Tampa Exec for some landing practice.

All systems are nominal. Its great to have Sally back!

Video Notes: To Lakeland, From Lakeland
Posted by Pilot at 9:44 PM No comments: