Did you hear that?

It had been a nice flight down to Venice (KVNC). The Florida weather clear and calm with just a few scattered high clouds. Perfect weather for flying an LSA. We were not alone. The EAA Group in Venice was having a Young Eagles Meetup and the traffic down the gulf coast was nearly saturated for this Saturday morning. Tampa Approach Control had all they could handle and was not accepting any VFR Flight Following. So that part of the lesson would remain incomplete. The navigation and communication topics were covered and we even got in a little bit of "Foggles" time.

As we entered the crosswind for RWY05 we heard a "Pop". MFD was fine, showing nothing unusual with our trusty ROTAX 912. I thought it might be a bird strike but all of Sally's surfaces, at least the ones I could see looked good. I told Leo to Fly The Airplane. Then I saw it. The canopy hook behind his shoulder had come loose and there was now a gap about an inch wide. I told him to fly a normal pattern and not be distracted if my hook also came loose. But it didn't. We made a normal landing and parked her at the FBO as we always do.  A quick inspection showed a small crack in the canopy rail. 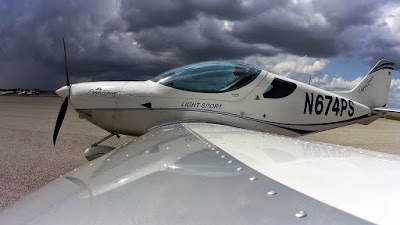 Some minor repair work would be required. Ownership has its privileges and its responsibilities. Between that and foul weather Sally would be down for about a month. 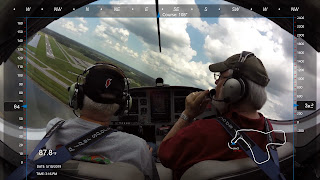 The Florida weather turned to the summertime cycle. Fog and mist in the early morning, turning to low clouds by lunch-time with thunderstorms by mid-afternoon. Even so, Sally and I were able to get in two "Back in the Saddle" flights and a new student Discovery Flight last week. We weren't able to get all of the planned items done, but did make progress...and had some fun doing it.
Posted by Pilot at 2:36 PM 2 comments: