I planned to fly the 60 miles to Sebring (KSEF) on Thursday. Mother Nature said no. Friday looked like a good weather day from the forecast, but when I checked the computer early in the morning it showed gusty winds (in the high teens) and low ceilings (2000' broken). The forecast said to expect improvement throughout the day so I went back to bed for an hour.

This time the forecast got it right. The winds had died down and the clouds disappeared. It would be a good day to go flying.

Tampa Executive Airport was already busy by the time I got to the run-up area. And it was cold for Florida (60°F). I actually had to wait for the oil to warm up before I could do my runup. Winds were out of the north at about 8kts, Sally jumped into the air. We turned to the southeast, climbed to 2500' and settled in for the 35-minute flight. Just a bit of a tailwind this morning, nice. 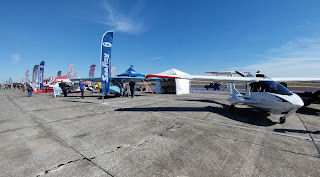 At twenty miles out I called Lake Jackson approach and was told to continue and report 3 miles north of the water tower. Since I've already done this a few times I already knew what to expect. Others on the frequency weren't quite so comfortable and not as familiar with the numerous lakes surrounding Sebring. Eventually, I was told to follow a "low wing" coming up from the south and switch to monitor tower frequency. The temporary tower was busy and when the guy in front of me was cleared for his right downwind turn I continued over the field anticipating the same instruction. It never came. So, I checked in, rocked my wings and used an extended right base leg to get back into the landing pattern. No problem. Sweet landing. Long taxi to the parking spot.

The shuttle van picked up about 5 of us for the 15-minute ride over to the show entrance. We talked about BasicMed, the use of autogas in the Rotax and many other aviation topics. Not once did anyone mention the government shutdown. Ahhh, relief. After buying my wrist band I went into the terminal to get some breakfast. It was exactly 11:00am, breakfast was no longer being served. RATS! BLT on rye.

It was a good family reunion. I saw Jamie as he was getting ready for his Rusty Pilot Seminar. Caught up with Walt as he walking back to his Flight Design booth. Talked to Josh and Lucas and congratulated them on a huge improvement...in their tent design. (Hopefully, this one won't blow away.) Next, I went over to see Jon and Lou at the Bristell tent, both were very busy so I was fortunate to have the opportunity to speak with Rich. He explained the canopy latching mechanism they use and it seems like a nice improvement over the SportCruiser system. Time will tell.

Next, I walked the flight line just to see if there were any new players. Not so far as I could see. It was a beautiful day to walk around looking at airplanes, but all good things come to an end.

Back on the shuttle, I spoke with a guy who is an FAA accident investigator. He has seen enough to know that the safety measures we use are important. If even the small things are ignored it can have devasting effects.

Sally was parked way the heck out on the line. It was a long taxi back to the runway and we had a few holds due to incoming traffic. When we got the runway the CHT was already warm and waiting for landing traffic was making it worse. Just as I was about to abort and taxi back to cool down we were cleared for takeoff. She cooled off quickly during the climb out.

The flight home was uneventful and very enjoyable. And the landing at home...5 stars!

First, there is the forecast weather. We check it before even going out to the airport. Two hours before takeoff the winds were forecast to be 31008Kts. Good enough for a pre-solo student to practice landings.

Then there is observed weather. The flags were flapping as I drove in. A cold front had moved through last evening and the winds were the aftereffect of the disturbed air behind that front. The broadcast weather (AWOS) at the airport reported 30010kts as we sat in the airplane listening before our taxi out to RWY 23. The windsock was nearly fully extended as it flapped in the stiffening breeze.

Finally, there is actual weather. That is what really counts, and as we lifted off the runway we knew almost immediately that we had been lied too.  The GPS showed a direct crosswind at 20kts at pattern altitude. Sally nearly stopped as we turned on base leg. The landing was going to be a battle. And a great learning experience. 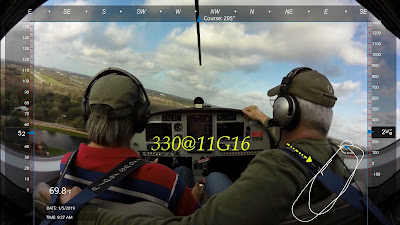 Two times around was enough experience for one day.

He that fights and runs away, May turn and fight another day; But he that is in battle slain, Will never rise to fight again. ~Tacitus