ADS-B, which consists of two different services, "ADS-B Out" and "ADS-B In", could be replacing radar as the primary surveillance method for controlling aircraft worldwide. In the United States, ADS-B is an integral component of the NextGen national airspace strategy for upgrading or enhancing aviation infrastructure and operations. The ADS-B system can also provide traffic and government generated graphical weather information through TIS-B and FIS-B applications.[6] ADS-B enhances safety by making an aircraft visible, realtime, to ATC and to other appropriately equipped ADS-B aircraft with position and velocity data transmitted every second. ADS-B data can be recorded and downloaded for post-flight analysis. ADS-B also provides the data infrastructure for inexpensive flight tracking, planning, and dispatch.[6] - wikipedia

I love having NEXRAD weather on board Sally. XMWeather was particularly useful during my last trip to Texas/Georgia and played a significant role in my enroute flight planning. However XM has a costly subscription tied to it and I'm always looking for ways to save my aviation dollars. I've been learning about ADSB but wasn't quite ready to switch over until I saw a post in SCFLIER.COM about a good deal on a Garmin GDL-39 ADS-B IN portable receiver. I decided to take the plunge and experiment with this new technology.

(First, General Aviation people are just great to work with. The seller took the time to thoroughly test the device and its sub-components BEFORE concluding the transaction.The deal went off without a hitch.)

I eventually plan to attach this to my 696 and remove the XMWeather antenna, but for testing purposes I'll run Garmin Pilot on my Android tablet and use Bluetooth as the connection technology. My first attempt failed. The tablet could find the device but gave an error code say it failed to connect. After multiple iterations and numerous Google searches it was time to call the experts. Garmin Support picked up immediately, asked a few questions and walked me through resetting the GDL39. Bingo, it works! ...at least sitting on my desk at home.

An added advantage for me is Traffic Information Service (TIS) for any aircraft that is transmitting ADS-B Out. Right now that only includes the Airlines and a few corporate jets so I'm not going to give up using Flight Following on my cross country trips.

Another technology in the cockpit. Remember to look outside!
Posted by Pilot at 6:16 PM No comments: 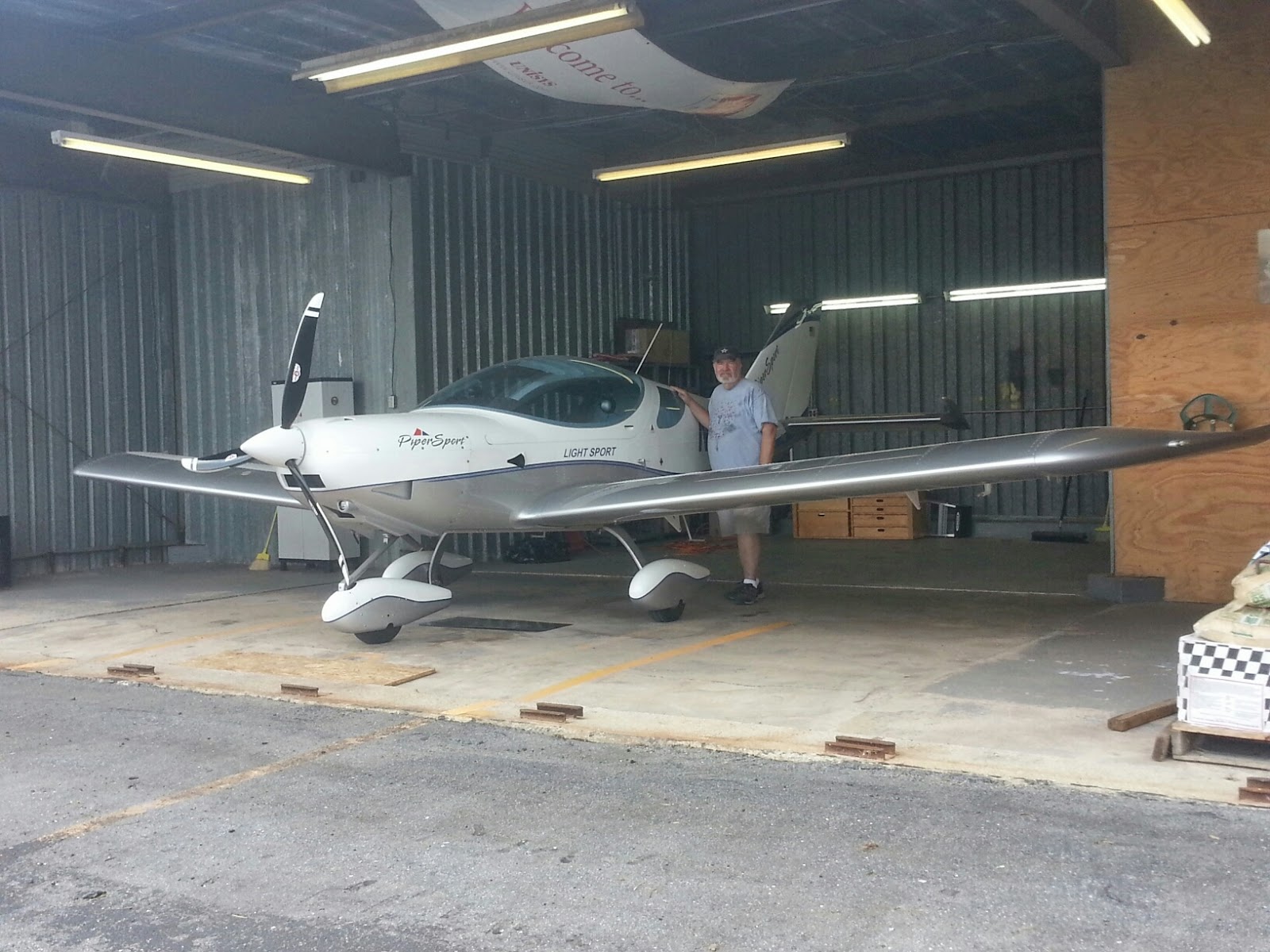 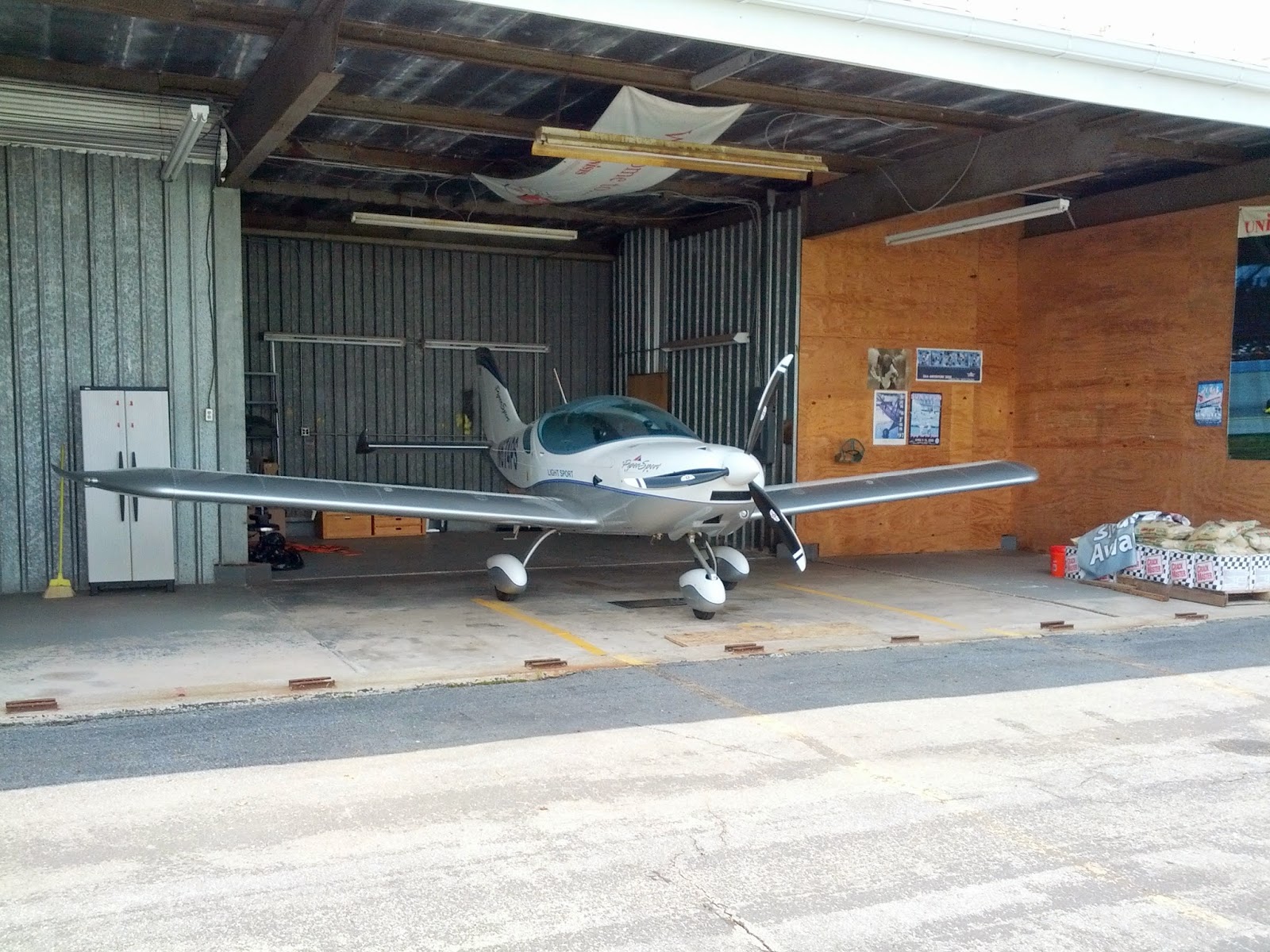 July 2nd: Holly took me out to the airport and helped preflight, even burping the engine. Sally was in good shape. We said our goodbyes and I went back to the FBO to complete my planning. It was pretty straight forward up to Blue Ridge (KMTV) but a decision had to be made about going east or west around the SFRA. Weather would be the primary factor so I decided to wait until the afternoon to see what might develop. Arthur was south and hopefully no factor. We took off about 9:00am into dense haze. Atlanta didn't want me in their Class B so I headed east at 2500'. As I turned northeast Flight Following asked me to descend to 2000' for traffic. The towers at 1340' and 1369' looked close and Sally didn't like them much. After a short time we were allowed back up to 2500 and then to our cruising altitude of 5500'. We were still in the haze so I asked for and was granted 7500'. We had a horizon (and a slight tailwind). Just south of the Virginia border we began our descent and I saw portions of the Blue Ridge Mountains to the east and then to the west of us. I stopped the descent at 3500' until within 10 miles of the airport. Although it was hot, the linesman came out to help with fueling and soon I was on the last leg home. Thunderstorms were building in central Pennsylvania so I decided to go east around Washington. Some of the restricted areas were active so I asked and received a waypoint (TAPPA)  to keep clear. Potomac and Patuxent Controllers were excellent. But now we had another race. XMweather showed heavy (yellow, red, brown) storms approaching Reading. A thin broken layer forced me to descend to 2500'. I was passing familiar airports now, 58M, N57, KOQN, and then N47 and KPTW, but the storm was ugly off my left wing. Dark charcoal gray clouds with heavy rain moved across the mountains just east of Reading. I cancelled and went VFR to land on RWY 16 at Butter Valley. As I put Sally in the hangar the rain started. 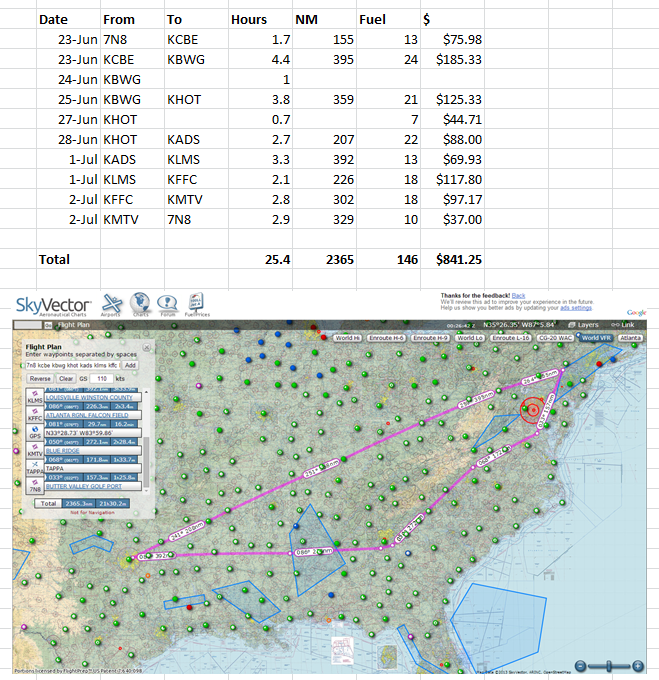 Sally averaged about 107 MPH and burned an impressive 19 MPG. Best speed was 118 kts from KADS to KLMS. Longest leg from KCBE to KBWG. This was a difficult trip, not for flying but because of decision making. Weather delays are difficult and many times I WANTED to see ways to continue my flight when none were really available. It was especially hard to do a "Look & See" only to return to the airport. But that is all part of VFR flying, and I am truly glad to have had the adventure.
Posted by Pilot at 12:49 PM No comments:

...This service bulletin can be accomplished by a shop of your choosing or at our Addison Texas facility. If you choose to have a local mechanic preform repairs we recommend that you have your service provider contact us. A specially designed wing rack is recommended for removing the wings and special wing alignment tools make wing re-installation much easier."


Monday 30th: The team had already pulled Sally into the hangar and were preparing to do the inspection by the time I called at 8:00am. Less than 15 minutes to the airport and I got a thumbs up that the inspection was successful. Sally wouldn't need to have her wings pulled off. So I turned her over to the Service Experts and let them "do their thing". John and Tom were excellent, advising me of each defect and telling me what to look for and how to avoid potential problems. A Condition Inspection, new brake linings, muffler shroud springs, spark plugs, and broken BNC connector on my ELT, and an oil change topped the list. I also learned how to treat a few nicks on the prop with Bondo and prop paint. Sally even got her belly washed. But this all took time so I extended my stay another day. (I later learned the weather in the Atlanta area was horrible and I probably would have been forced to land early and spend the night short of destination...again.)

Tuesday 1st: Sally started easily by 10:00am and I had the radio tuned to Ground Control to request Flight Following. Once airborne we climbed on course to 5500' but were still in the dense haze.  We went up to 7500' to get a horizon and enjoy the tailwinds. It was a smooth flight crossing the Mississippi and into Louisville Winston County Airport (KLMS). This airport was just a fuel stop and I expected to be there all alone but as I taxied up to the fuel tank a man in a golf cart came out to offer assistance. It was a hot, uncomfortable day but he patiently showed me how to run the pump and offered to fuel the plane for me. This was true Southern Hospitality and as I taxied out he gave me a smart salute to send me on my way. (I love General Aviation.) We climbed to 5500' but were just in the base of a scattered layer of small cumulus clouds so once again we went up to 7500'. As we started our descent into Atlanta Regional Airport-Falcon Field (KFFC) I noticed a deep sound on my headset. My eyes immediately went to the engine instruments and finding everything normal looked at the canopy. That was also secure. Then I realized that the batteries in the headset had gone dead. Once replaced I could hear clearly again, phew. Falcon Unicom confirmed that my ride had arrived.We landed at 5:00pm EDT.